Something to Know - 30 December Today's Los Angeles lead editorial is spot on about what is the matter with the USA.   As the decades have rolled on since the period of euphoria and post World War !! boom, particularly after the Korean "War", a decline in the understanding of our democracy and its workings of government has slowly declined.  What helped nourish our democracy, in an ironic way, was the Selective Service, which drafted people to serve in the Armed Forces.   However the discussion about "The Draft" and compulsory National Service is too long and requires more space than is available here.   As this op-ed points out, we are at the point where our younger people have no idea how our form of government works, how it evolved, or what it does, or what it is supposed to do.   The adult population who was the youth of the 70s and 80s is now those today in whose hands rests the minds and voting pencils that determine the outcome of our elections.   Keep on rolling on through the decades, and you will soon realize that we are running out of informed citizens.  One might point to our think tanks and TV talking heads as an example of today's teachers of democracy and systems of government, but those influences really are only small silos which preach to their choirs, and have little influence on the wide mass of the ill-or-non-informed.   The danger that we now face is that this dumbed-down citizenry is ripe for the bastions of great wealth (the benefactors of Citizens United) to pillage the system to buy, advertise, and usurp the powers that are supposed to be "of the people".   It's almost like we ceased to be a vibrant nation when Norman Rockwell ceased painting:
http://www.latimes.com/opinion/editorials/la-ed-citizenship-civics-20141230-story.html
Editorial

Citizenship 101: Too many Americans are ignorant of the basics of democracy

By THE TIMES EDITORIAL BOARDcontact the reporter

In 1954, when the Supreme Court ruled that segregated public schools were unconstitutional, Chief Justice Earl Warren emphasized the importance of public education as a crucible for good citizenship.

"Today," Warren wrote, "education is perhaps the most important function of state and local governments. Compulsory school attendance laws and the great expenditures for education both demonstrate our recognition of the importance of education to our democratic society. It is required in the performance of our most basic public responsibilities, even service in the armed forces. It is the very foundation of good citizenship." 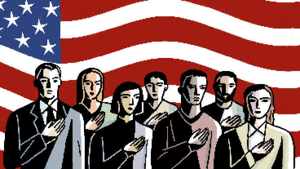 EDITORIAL SERIES: Exploring the meaning of citizenship in the 21st Century

But a growing number of critics charge that education in good citizenship is being shortchanged by an American educational system that is focused on other "core competencies." The result is that too many products of that system are ignorant of the basics of how American democracy functions, and lack the knowledge to participate fully in the society it sustains. One of the most prominent spokespeople for this view is retired Supreme Court Justice Sandra Day O'Connor, the last member of the court to have held elected office.

In a 2008 article written with former Rep. Lee Hamilton of Indiana, O'Connor argued that "civic education has been in steady decline over the past generation, as high-stakes testing and an emphasis on literacy and math dominate school reforms. Too many young people today do not understand how our political system works."

Unfortunately, O'Connor is right. A survey of adults conducted in September by the Annenberg Public Policy Center of the University of Pennsylvania found that only 36% could name all three branches of the U.S. government; 35% couldn't name even one. Only 27% of respondents knew that it requires a two-thirds vote of the House and Senate to override a president's veto, and 21% wrongly thought that a 5-4 Supreme Court decision must be returned to Congress for reconsideration. Kathleen Hall Jamieson, the director of the Annenberg center, said the survey "offers dramatic evidence of the need for more and better civics education."

Education in good citizenship is being shortchanged by an American educational system that is focused on other 'core competencies.'-

Civics education hasn't completely disappeared from American schools. Virtually all states require students to take at least one social studies course as a requirement for high school graduation, and most require some study of civics or American government. Often students are required to study foundational documents such as the Declaration of Independence and the U.S. Constitution. In California, content standards for 12th-grade students include study of "the history and changing interpretations of the Constitution, the Bill of Rights, and the current state of the legislative, executive, and judiciary branches of government." Even the much-maligned Common Core standards for English Language Arts & Literacy identify the Declaration of Independence and Constitution (along with Abraham Lincoln's second inaugural address) as foundational documents that all students should be able to analyze.

Yet the Center for Information and Research on Civic Learning and Engagement found in 2012 that only nine states required students to pass a social studies test in order to graduate from high school. The same report found that such tests increasingly have taken the form of multiple-choice questions to the exclusion of essay questions or independent projects that might acquaint students with how democracy actually works. (A student can learn more about parliamentary procedure by taking part in a mock congressional vote than by reading an account of a real one.)

cCommentsADD A COMMENTSEE ALL COMMENTS
46

That leaves ample room for improvement. At a minimum, students in all grades need to be taught about the American political system and the structure of government at the federal, state and local levels. Documents such as the Declaration of Independence and the Constitution should be studied not just as literary or rhetorical artifacts but as examples of political philosophy and guides to civic engagement. And civics education (like all education) should encourage participation and creativity on the part of students. Finally, students should be specifically assessed on how well they understand the operation of the political system in which they will play a role as citizens. Granted, students, teachers and parents already feel burdened by the proliferation of tests, and a good case can be made that too many tests are administered too often. But there should be room in any testing regime for an assessment of knowledge about civics.

U.S. naturalization test: The 100 questions you should know the answers to

These ideas figure in a report issued this year by the California Task Force on K-12 Civic Learning, chaired by California Chief Justice Tani G. Cantil-Sakauye and State Supt. of Public Instruction Tom Torlakson. Among other recommendations, the task force proposes that an emphasis on "civic learning" be incorporated in instruction beginning in kindergarten (a 12th-grade civics requirement is of no use to a student who leaves school earlier than that) and that civics instruction be "action-oriented" and "project-based." The task force also recommends that the state "integrate civic learning into state assessment and accountability systems for students, schools and districts." Finally, it suggests that schools reach out to "community stakeholders" who could assist in "civic education and engagement." That's a promising idea but also a potentially controversial one. Schools need to find a way to expose students to public officials and activists without seeming to take sides.

Like the teaching of American history, education about government can be delicate, raising questions about the distinction between instruction and indoctrination. Some supporters of expanded civics education believe it should not only inform students about the American system of government but also celebrate it as superior to all others — an unwise approach that would make civics class an extension of the Pledge of Allegiance. We believe that schools can inform students and engage them as citizens without imposing an official orthodoxy. After all, debate and dissent are also civic virtues.

This is part of an ongoing conversation exploring the meaning of citizenship in America today. For more, join us at latimes.com/citizenship and #21stCenturyCitizen. We'd love to hear from you. Share your thoughts, rebuttals and experiences with us atletters@latimes.com.

--
****
Juan
It is to be regretted that the rich and powerful too often bend the acts of government to their own selfish purposes.
- - Andrew Jackson
Posted by 1ma2t