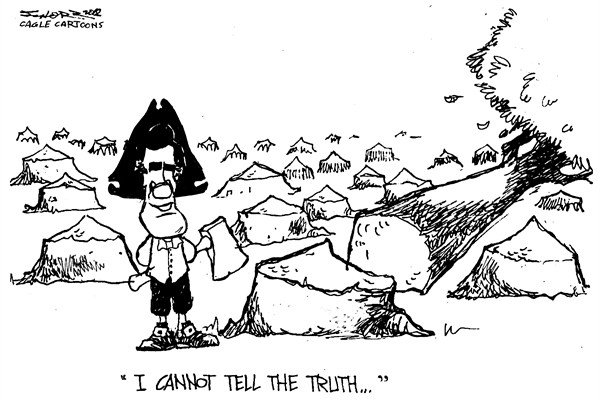 1.  I have just finished watching the "debate".   Several things were evident: (1) Romney knew he was in over his head (2)  His advisers told him to just agree with Obama and hope for the best (3)  Romney did his best on-line real time etch-a-sketch dance and reversed himself on every issue he ever muttered in his run up to the campaign so far.   His statement that "Syria is Iran's route to the sea" is something he learned from the Sarah Palin School of Geography.  It is woefully apparent that Romney is totally devoid of any strength of character, and that is a sad attribute for anyone running for president.  He is an empty suit, with no consistency of principle, and has pandered all along the way.  The pundits, critics, and the voters are all now rehashing the performance, and I will find a few choice ones to include before I send this out for Tuesday morning.  Here is one recap from the Washington Post:
http://www.washingtonpost.com/politics/decision2012/presidential-debate-obama-romney-face-off-on-foreign-policy/2012/10/22/ca25b8dc-1c7f-11e2-ad90-ba5920e56eb3_print.html
2.  Never have I seen any election so consumed with polling - the amount of polls, the differences in polling results, and the discussion about the polling.   Consensus is that this will be a very tight election.   In my opinion it will all come down to CHARACTER - where Obama has much to admire and Romney who has none.  In the background lurks the ugly fact of racism, and nobody want to talk about it, but it is there.   As a result of Romney's debate #3 dance, it will be interesting to see if the discipline in the ranks of the right wing Tea Baggers demonstrate some irritation that Romney backed off on all of those issue statements that got him the nomination.  Here is the NY Times editorial on the concluded debate:
http://www.nytimes.com/2012/10/23/opinion/the-final-presidential-debate.html?hpw&_r=0&pagewanted=print
3.  Continuing on with the "character" issue, we have this piece on Bain's work in getting Big Tobacco (Phillip Morris) on track to getting a hunk of the Russian market.  Bain was struggling financially at the time, but Mitt saw no problem or conflict with his Mormonism in promoting cigarettes.   It is interesting that this article refers to Romney as "an empty suit".  I find it interesting that normally Mormons are noted for their special underwear, but in Mitt's case, more attention is given to his outerwear and its lack of internal substance:
http://truth-out.org/news/item/12219-mormon-mitt-in-bed-with-big-tobacco
4.  We'll end up with Thom Hartmann for some other news that you may find of interest:
http://truth-out.org/news/item/12262-on-the-news-with-thom-hartmann-obama-and-romney-will-square-off-tonight-in-the-third-and-final-debate-and-more
--
Juan

"The nice part about being a pessimist is that you are constantly being either proven right or pleasantly surprised. "
-- George F. Will
"Before I got married I had six theories about bringing up children; now I have six children and no theories."
-- John Wilmot
"A person is always startled when he hears himself seriously called an old man for the first time."
-- Oliver Wendell Holmes
"Barometer, n.: An ingenious instrument which indicates what kind of weather we are having."
-- Ambrose Bierce
Posted by 1ma2t