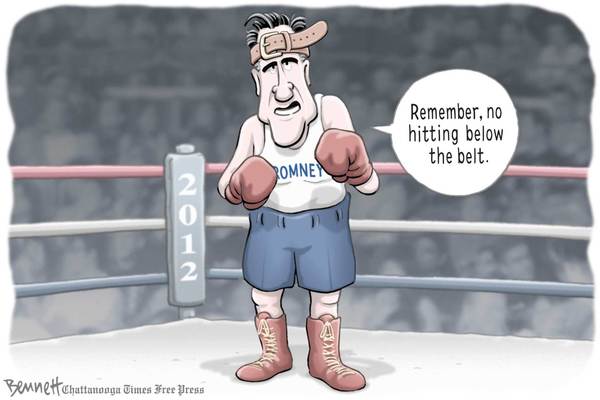 1.  Going back to the race-bating and hate-filled political campaign that the Chicago Cubs owner was contemplating, and how it fizzled out, check in here to see how saner minds in the Republican Party squelched it:
http://www.nationalmemo.com/fat-cat-urged-to-bankroll-anti-obama-hatefest/
2.  The Birthers in Arizona are really nuts.  The arrogant sheriff of Maricopa County is sending a team to Hawaii to check out Obama's birth certificate before that state can qualify his name on the ballot.  I am trying to think of an appropriate action to put upon that state to see if they qualify for federal funding.  Can you think of something?:
http://www.loop21.com/politics/joe-arpaio-obama-hawaii-birther-investigation
http://thinkprogress.org/justice/2012/05/22/488323/sheriff-joe-arpaio-uses-taxpayer-funds-to-pursue-birther-conspiracy-probe/
3.  Here are two pieces of evidence at what the Democrats are running up agains the anonymous pile of Super Pac Money, and it portends what may happen in November.  So it is going to take more than just money to make things happen:
http://www.washingtonpost.com/blogs/the-fix/post/wisconsin-recall-slipping-away-from-democrats/2012/05/18/gIQAnVP5YU_blog.html
http://theweek.com/article/index/228254/whos-winning-the-2012-presidential-money-race
4.  Is this country the greatest in the world or what?   Justice?   WTF?   Boston University student illegally downloads 30 songs and the Supreme Court rules that he has to be stuck with a $675,000 fine.  Now if you are a bank employee and illegally create documents to foreclose on home buyers and kick them out on to the streets...what do you get?   A bonus:
http://www.npr.org/blogs/thetwo-way/2012/05/21/153199008/supreme-court-lets-stand-students-675-000-penalty-for-downloading
5.  Here is a somewhat detailed picture of Newt Gingrich's financial empire and ventures going broke.  The store is bankrupt.  The arrogant hot air that kept it going for so long has all gone flat.   In my humble opinion, it could not have happened to a nicer guy:
http://www.reuters.com/article/2012/05/22/us-usa-campaign-gingrich-idUSBRE84L0G620120522

6.  Reading articles like this is like reading a George Orwell novel on how the pigs run the government.  It is so blatant and comically tragic that you really wonder where or when this country will wind up:
http://www.washingtonpost.com/opinions/senators-put-federal-regulators-not-jpmorgan-on-the-hot-seat/2012/05/22/gIQAPmv8iU_print.html
7.  The economic situation in Europe precipitates this article.  The unilateral imposition of austerity without adhering to maintaining the infrastructure of the social structure and the related services has proven to be a disaster.   The governments (read the Euro Zone) cannot ignore what has traditionally kept the citizenry in harmony.  There is much to learn from Europe for the States of America:
http://www.nytimes.com/2012/05/23/opinion/the-crisis-of-european-democracy.html?_r=1&ref=opinion&pagewanted=print
8.  Gregory Rodriguez and his personal story of what it means to have an immigrant history, in a changing city, and how the interpretation of "immigration" morphs through the ages.  Gregory is a Los Angelino:
http://www.latimes.com/news/opinion/commentary/la-oe-rodriguez-immigration-mexican-los-angeles-20120514,0,7270168,print.column

"If we have learned one thing from the history of invention and discovery, it is that, in the long run - and often in the short one - the most daring prophecies seem laughably conservative."
-- Arthur C. Clarke
"People who say they sleep like a baby usually don't have one."
-- Leo J. Burke
"Ahhh. A man with a sharp wit. Someone ought to take it away from him before he cuts himself."
-- Peter da Silva
"It is the final proof of God's omnipotence that he need not exist in order to save us."
-- Peter De Vries
Posted by 1ma2t