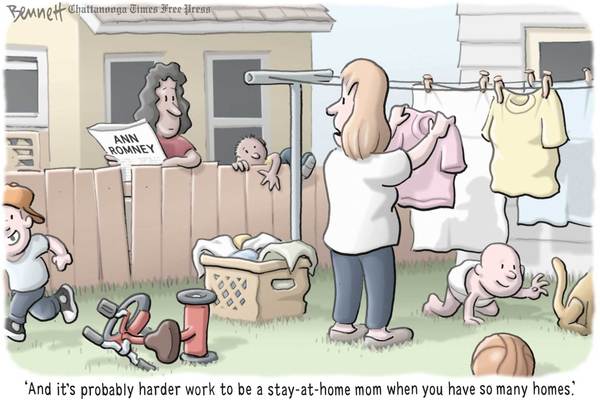 1.  Open microphones can make a bad day for a candidate - witness Mr. Etch-a-Sketch and his secret agenda:
http://www.salon.com/2012/04/16/what_mitt_won%E2%80%99t_say_in_public/singleton/
2.  Evidence in a recent random poll suggests that the Tea Party has brewed itself out of favor, and that interest is falling:
http://www.washingtonpost.com/blogs/behind-the-numbers/post/tea-party-support-stable-but-interest-is-waning/2012/04/14/gIQAPXyKHT_blog.html
3.  An opinion from a conservative scholar on the Constitutionality of the Affordable Care Act (aka Obama Care):
http://www.tnr.com/print/article/politics/102685/conservative-defense-obamacare-affordable-care-health
4.  As pointed out in this column, it is the soul and character of Mitt Romney that will bring him up short in the eyes of the voters.   He is a smooth liar:
http://www.washingtonpost.com/opinions/mitt-romneys-enviable-ability-to-ignore-the-truth/2012/04/16/gIQACwTUMT_print.html
5.  The politics of fish.  Yup, did you ever think that market forces and free enterprise, when not under some sort of inspection and regulation, can be a scam and corrupted to the consumer?:
http://www.latimes.com/news/local/la-me-seafood-fraud-report-20120417,0,4879755,print.story
6.  It really should not be too much of a shock that Santorum has declined to endorse Mitt-Bott.  After all, Ricky called Mitty "the worst possible Republican to put up against Obama":
http://www.latimes.com/news/politics/la-pn-rick-santorum-declines-to-endorse-mitt-romney-20120416,0,6136876,print.story
7.  The difficult present and future that the USA faces right now is the reality of our standing in the world.  The Brits went through that, and the Dutch before that, and the Spaniards before that.  It is costly to maintain dominance as we have in the past.  We are wasting away resources pretending that we still have our old mojo.  I can just now hear the pandering by the right-wing of this country to the nostalgia of hegemony:
http://www.nytimes.com/2012/04/17/opinion/echoes-of-the-end-of-the-raj.html?ref=opinion&pagewanted=print
8.  There is no shame in the South.  The epitome of ignorance and intolerance is evident by the actions of the state of Alabama.  That geographical section of the nation is moral and ethical chemical toilet of America:
http://www.nytimes.com/2012/04/17/opinion/alabama-digs-a-deeper-hole.html?ref=opinion&pagewanted=print
--
Juan

"Military justice is to justice what military music is to music."
-- Groucho Marx
"Once you've learned to study in a bathing suit on the grass with muscled men throwing frisbees over your head, you can accomplish almost anything."
-- Susan Rice
"It is difficult to get a man to understand something when his job depends on not understanding it."
-- Upton Sinclair
"Some mornings it just doesn't seem worth it to gnaw through the leather straps."
-- Emo Phillips
"Any American who is prepared to run for president should automatically, by definition, be disqualified from ever doing so."
-- Gore Vidal
Posted by 1ma2t