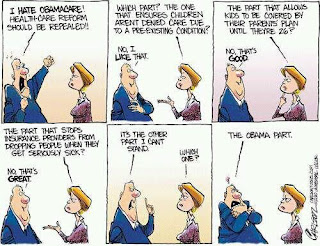 1.  I was going to create an April Fools version, but that did not work out.  The first thing I read was this article by Van Jones, and I lost all sense of comedy.  It is a very sobering and accurate assessment on the past 4 years:
http://truth-out.org/opinion/item/8223-the-age-of-obama-what-went-wrong-and-how-to-fix-it

2.  While all of the discussions and predictions are swirling around, we cannot turn our backs on the state of our current health care and not figure out what would happen if the Affordable Care act is thrown out by 5 guys who really have other priorities:
http://www.smirkingchimp.com/print/42307/

3. The one piggy backs on the previous entry, but in a more direct way on the partisanship of interpretation that suits 5 suits:
http://www.smirkingchimp.com/print/42304/

4.  If you are not familiar with the great radio program "This American Life", you should be.   I get it on my iTunes on the radio podcast download.  It can be accessed from this link.  This particular broadcast (which I have not yet heard), is about how Congress is really on a pay to play program.  I guess it goes into the need supply legislators with campaign cash in order to get into the door of influence, and quid-pro-quo gamesmanship:
http://www.thisamericanlife.org/radio-archives/episode/461/take-the-money-and-run-for-office

5.  This is a compelling argument for anyone who was once, or would like, or is an advocate of whatever the law is supposed to be:
http://www.washingtonpost.com/business/economy/steven-pearlstein-eat-your-broccoli-justice-scalia/2012/03/30/gIQAyGkynS_print.html

6.  This editorial concentrates on "....a political ideology that limits government and promotes market freedoms, with less regard to the general welfare"  that is driving the speculation of 5 guys on the Supreme Court:
http://www.nytimes.com/2012/04/01/opinion/sunday/the-roberts-court-defines-itself.html?_r=1&ref=opinion&pagewanted=print

7.  An interesting read of a book review by Thomas Friedman.  Everything appears to be a well-researched piece with good arguments.  The real kicker is when you get to the last paragraph, and realize that it speaks to us, as in USA:
http://www.nytimes.com/2012/04/01/opinion/sunday/friedman-why-nations-fail.html?ref=opinion&pagewanted=print

8.  There is no rhyme or reason to how medical costs are calculated or billed.  Steve Lopez points that out here.  Between insurance companies and health care providers, there is no logic on what the bill is.  This is the classic example of the unregulated "free-market" forces at work.  This is the tragedy of our health care system:
http://www.latimes.com/health/la-me-lopez-erfollowup-20120401,0,1978957,print.column

9.  Sorry that there are no April Fools pranks today.  The only one in operative condition belong to the Wannabees and the stooges on Boehners side of the aisle.  Well, may be can use this one:

Republicans Reveal that Entire Presidential Race was a Prank

WASHINGTON (The Borowitz Report) – In an April Fool's Day announcement that took the political world by storm, the Republican Party revealed today that its entire presidential race had been an elaborate prank.

Moments after revealing that the GOP primary had been one long practical joke, Mr. Santorum explained the rationale behind staging such a complicated and expensive prank.

"A lot of Americans are suffering right now and need a good laugh," he said.  "I think my colleagues and I can be justifiably proud of the entertainment we provided – even if it meant me wearing these ridiculous sweater vests."

Former Godfather's Pizza CEO Herman Cain agreed that the prank had gone well, but added, "I'm just amazed that the American people never figured out we were kidding."

"I mean, I kept saying '9-9-9' every four seconds, which was total and utter bullshit," he said.  "And everything out of Michele's mouth made her sound like a mental patient."

Texas Governor Rick Perry said he worried that "every time I screwed up at a debate people would figure out I was pulling their legs," but added, "The American people seemed to accept the idea that a Governor of Texas could be a blithering idiot."

When one reporter mentioned that Rep. Ron Paul (R-TX) was not at the press conference, a sudden silence fell over the gathering.

"Did anyone ever tell Ron this was supposed to be a prank?" Mr. Romney asked.  "Holy cow, maybe he's really serious."

"Never be afraid to laugh at yourself, after all, you could be missing out on the joke of the century."
-- Dame Edna Everage
"Love is the triumph of imagination over intelligence."
-- H. L. Mencken
"All God's children are not beautiful. Most of God's children are, in fact, barely presentable."
-- Fran Lebowitz
"I passionately hate the idea of being with it, I think an artist has always to be out of step with his time."
-- Orson Welles
Posted by 1ma2t