Take off the blinders: a commentary on class in higher ed

The communities at the three institutions of higher education that I associate with - Pomona, Smith and UCLA - have been talking a LOT about class lately. Naturally this has me thinking.

Pomona
Many readers of The Juan Percent are familiar with the maelstrom that blew up in December at Pomona. Pomona fired 17 workers, most from the dining halls, because they were unable to produce documentation verifying their ability to work legally in the US (link to article.)

Pomona, for those who do not know, has a large endowment relative to its size: over one billion dollars. (UCLA also has a multi billion dollar endowment. But its student population is over 35,000.) When I was an exchange student in 2002, The Princeton Review rated Pomona as the 2nd happiest college in America.

As I saw it, Pomona was wealthy and used its largesse to create a Camelot. From its generous need based aid policy to its beautifully maintained grounds and subsidized beer nights, Pomona strove to "equalize" the Pomona experience amongst its students through money. And by turning the other way for so long, Pomona extended its wealth into improving the economic well-being of area families with an undocumented worker employed at Pomona (first through it's contractor and later directly).

Rightfully so, the Pomona community (including myself) was conflicted when the 17 workers got let go and the details of the multi month investigation emerged. We had a lot of conversations about immigration policy, but also about race and class (the majority of those fired were minorities and poor.) Pomona, for all of its wealth, could not make this "problem" go away. 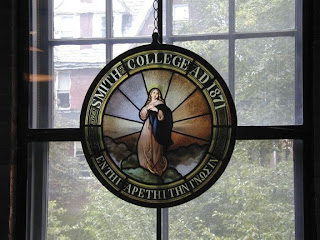 Smith
More recently, many women in the community of students and alumnae of my alma mater, Smith, got riled up following the publication of an incindiary letter to the editor in which a 1984 alumna claiming to speak for Westchester and Fairfield counties said it was "unfortunate" Smith was admitting more students of color and lesbians because it was the women in pearls and cashmere who married Amherst boys who endow buildings with their names on them.

This letter generated so many comments that it overloaded the newspaper website and the editors brought it down. Alumnae and current students contributed to a Tumblr called "Pearls and Cashmere" basically to testify their love for Smith and back up Smith's efforts to further diversify its student population. Of course this incident was also covered by CNN and Jezebel, so it got some national attention.

Although it too has considerable wealth, I found Smith to be far more rough and tumble. I experienced Smith as a place where speaking up in class was not necessarily welcomed. For all of the comments from women claiming Smith was a place where they felt safe, that they could embrace differences and diversity, I would submit that was not a universally shared belief.

Nonetheless, the assertion the alumna made that students of color on aid do not support Smith following their graduation made me furious. I, like several, moneybombed Smith: I more than doubled my annual contribution to the Smith Fund.

In addition, I wondered about the women who didn't speak up during the maelstrom. Perhaps for those, Smith was their safety school. I think that is okay. But were the same people who sought to oppress and demean and bully people like me for finding their voice? Many questions, no answers.

UCLA
An environmental economist/prolific blogger posted to the Christian Science Monitor that UCLA should admit fewer transfer students because they were less likely to be donors due to having spent less time on campus and developing less loyalty to the institution. Like many, I took issue with this. Firstly he called the students "transients". For someone who claimed he wanted to cultivate students to become donors, insulting a substantial segment of our community by calling them "transients" seems to be contradictory.

But secondly, he opened a can of worms for which he was utterly unprepared to defend about class.

It is common knowledge amongst families in California (those with college-bound kids, and those with currently enrolled students in the UC) that tuition has skyrocketed over the past 12 years, as state support has diminished. (Luckily the "cost" of educating a student has remained steady in adjusted dollars, primarily because of "efficiencies" but also because our professors teach heavier course loads and we deploy more TAs.)

There was a time when someone could work their way through UCLA without taking out debt.

For most, this is impossible.

UCLA, like its other UC campuses, is committed to enrolling transfer students as part of the California higher education master plan. Judi Smith, the undergraduate dean, does a very good/smack down of this economist's op-ed:


In my decades of experience at UCLA, I have found that transfer students strongly identify with and ardently support the campus, both before and after they graduate. They are, regardless of the path that brought them here, proud UCLA Bruins. Recent statements suggesting that transfer students are less committed to or less engaged on our campus than four-year students do a disservice to our student body and to the university.

Students arrive at UCLA as undergraduate transfers for a variety of reasons. Some of them are financially related.

And there lies the offensiveness of this professor's opinion for me.

UCLA is a public institution. Its purpose is to educate STUDENTS, regardless of their race, class, or ability to pay, for the betterment of the California economy.

UCLA clearly plays an important role in providing community students a place to finish their four-year bachelor's degrees. You can't expect private schools of comparable caliber to play this role.

Example: In the semester I attended Pomona, over 200 students applied for transfer admission.

Pomona took a whopping THREE PEOPLE for Fall 2002. They included the woman who became my roommate; our next door neighbor, a stand-out varsity tennis player from a well-to-do family; and this very eccentric community college graduate who dropped out after eight weeks.

And at least Pomona took transfers. I remember reading many years back that Princeton had stopped admitting transfer students altogether.

As I wrote in the comments section of this professor's blog entry (he cross-posted), I'd rather see the conversation be about how are we, as an institution, providing the support necessary for students regardless of their matriculation point thrive.
For example, does every student have a grown-up who cares about him?

Also, btw -- transfer students support UCLA at roughly the same rate as donors who matriculate as freshmen (the difference is not statistically significant). But the professor didn't know that because he didn't ask us before he blathered his opinion to the world.