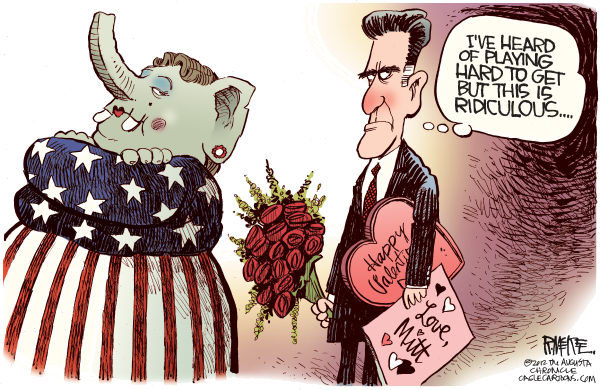 1.  The forever intrepid correspondent of the Albany New Bureau pointed out an article that I missed, and is worthy of your perusal.  It is about a mercenary militia, employed by capitalist organizations of brief life, who depend on contracts, and more often sub-contracts from equally non-stable contractors to do the dirty work of the Department of Defense.  The "contractors" don't quite have the same benefits or safety net of those in uniform of the armed forces, even though those jobs were formally done by our military:
http://www.nytimes.com/2012/02/12/world/asia/afghan-war-risks-are-shifting-to-contractors.html?ref=rodnordland&pagewanted=print

2.  This article from the Washington Post cautions one as to how much exactly Mitt Romney was the "savior" of the 2002 Winter Olympic Games in Utah.  With scrutiny being paid to just about everything he has done or said, there is evidence that he did come and help at a critical time, but it was not because of his own effort - there were others:
http://www.washingtonpost.com/sports/10-years-after-salt-lake-city-olympics-questions-about-romneys-contributions/2012/02/01/gIQABnCX9Q_print.html

3.  Dana Millbank points out that the noise coming from the GeeOpee is largely of a negative tone - concentrating on rude and nasty portrayals of Obama, and not much else.  Nothing of positive substance on what the agenda and program of their intentions is heard.  This is not of any benefit to their cause:
http://www.washingtonpost.com/opinions/at-cpac-republicans-become-nattering-nabobs-of-negativism/2012/02/10/gIQAYhI44Q_print.html

4.  EJ Dionne (himself a Catholic) endorses the revision, conciliation, and increased scope of the "contraceptive" issue:
http://www.washingtonpost.com/blogs/post-partisan/post/dionne-obama-contraception-compromise-women-white-house-does-the-right-thing/2012/02/10/gIQAcCWK4Q_blog.html

5.  If you have the patience to read through this article, you get a medal.  If you want to spend some time with the video, that works.  It is about an insider who worked with Reagan, and the Bushes, on tax policy.  He wrote honestly from his perspective, and his fellow conservatives turned on him because they labeled him a traitor.  So what else is new?:
http://www.truth-out.org/print/12448

6.  It appears that there may be a difference of opinion on our "success" in Afghanistan.  The military voices are not consistent, and I can't wait to get my Rolling Stone copy this week to read all about it.  Consider this piece an introduction, with more to follow:
http://www.truth-out.org/print/12473

7.   Paul Krugman's contribution today is that the current slate of GeeOpee wannabees have severely destroyed the concept of "Conservative", to the point that it's really hard to see what good becomes of it.  Of course there are contributions to be made to the discussion, but the way Romney is operating - he can't run on his record as Governor of Massachusetts because of his progressive health care program that he put in place, and he really can't afford to run on his business record at Bain, because of the questionable tactics and obscene personal wealth.  So, he is running with his invention of a political creed that fails him at just about every juncture:
http://www.nytimes.com/2012/02/13/opinion/krugman-severe-conservative-syndrome.html?_r=1&ref=opinion&pagewanted=print

8.  This article is included because it concerns an attempt to convert sea water to potable fresh water along the California coast.  More information on the technology used, and steps to mitigate harm to the ocean animals and biology are needed at to how this is going to be done.  However, conversion from sea to fresh water on a large scale is going to have to be explored if survival of humans is at stake:
http://www.latimes.com/news/local/la-me-0211-sea-water-20120211,0,2985952,print.story
--
Juan

"It's kind of fun to do the impossible."
-- Walt Disney

"Man always gets less than he demands from life."
-- Jack London
"When a true genius appears in this world, you may know him by this sign, that the dunces are all in confederacy against him."
-- Jonathan Swift
"We need a president who's fluent in at least one language."
-- Buck Henry
"I have often depended on the blindness of strangers."
-- Adrienne E. Gusoff