Something to Know - 4th of July

The 45th does have an ancestry.  Most former presidents have an interested folk in their history who claim to be close and brag about a famous person or family that "did good".  The Droomps would just as soon you not bring it up.  Even this tiny burg of Kallstadt, Germany near the "Texas of Germany" (Bavaria) would just as soon you talk about something other than you know who.

KALLSTADT, Germany — Herbert Trump did not want to talk about it. Neither did Ilse Trump. Ursula Trump, who runs the Trump bakery in the next village, eventually relented, palms upturned, and sighed: "You can't choose your relatives, can you?"

The relative in question is Donald J. Trump, president of the United States, multimillionaire, the most powerful man on the planet and a seventh cousin of Ursula Trump's husband — though in Kallstadt, a sleepy village nestled in the rolling hills of Germany's southwestern wine country, he is simply "Donald."

That is not least to avoid confusion with the other Trumps (or "Droomps," as the name is pronounced in Palatinate dialect) listed in a phone book for the area: Beate Trump, a podiatrist in another nearby village, for example, or Justin Trump, a teenager whose friends say he sometimes gets teased for his coif of orange-blond hair.

But the Weisenborns and the Geissels and the Benders and the Freunds in Kallstadt are related to Mr. Trump, too. "Practically half the village is," chuckled Kallstadt's mayor, Thomas Jaworek, before quickly adding: "I'm not."

Both of Mr. Trump's paternal grandparents, Friedrich and Elisabeth Trump, were born in Kallstadt, home now to 1,200 inhabitants. Growing up directly opposite each other, they were baptized in the village church and married a few miles down the road before immigrating to the United States.

By all accounts, Mr. Trump shares some key characteristics with his German grandfather, among them an interest in hair: Friedrich worked as a barber in New York before making his fortune running a restaurant and, reportedly, a brothel for gold diggers in the Yukon.

Like his grandson, Friedrich was a teetotaler and avoided his military service. Though rather unlike him, he prided himself in paying taxes on the 80,000 marks he possessed in 1904 — the equivalent of a millionaire today — archival records show.

In Protestant Kallstadt, where volunteers diligently tend communal flower beds and vintners have run a cooperative for 116 years, Friedrich Trump was a popular guy. Contemporaries described him as "polite," a man who "lived quietly and withdrawn" and had an "unblemished way of life." 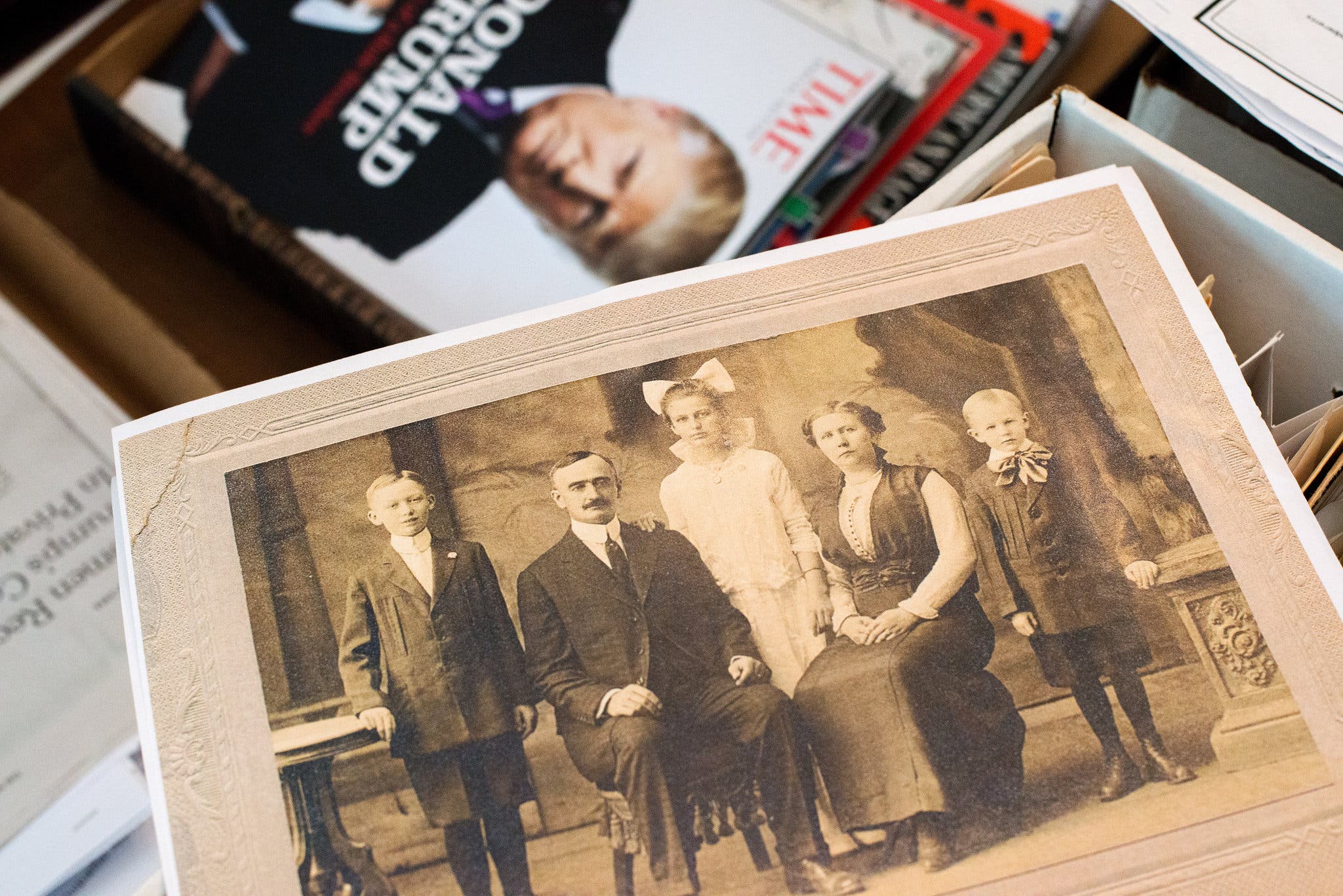 A copy of an early 1900s photo of President Trump's forebears. From left, Fred, his father; Friedrich, his grandfather; Elizabeth Trump; Elisabeth Christ, his grandmother; and John George Trump.CreditBryan Thomas for The New York Times

Kallstadt's relationship with Donald Trump is more troubled, which may explain why there are no signposts pointing to the ancestral Trump home, a modest property with a sloping roof and a blue gate on one of the main village roads, let alone a plaque.

And even though the local tourism office celebrates the regional delicacy of pig stomach, and the fact that the church organ dates to the days of Johann Sebastian Bach, little, aside from the names on a few graves in the village cemetery, hints at Kallstadt's most famous grandson.

"We don't use the name in any way in touristic marketing," Jörg Dörr in the tourism office explained. "The topic is too controversial."

Keeping a low profile has not kept the tourists or media away, nor the occasional Trump impersonator wandering up and down the street. On the contrary: "I have people peering through my window or knocking on my door all the time, asking 'Where is the Trump house?'" lamented Manuela Müller-Wohler, who runs a nursery in Mr. Trump's grandmother's childhood home. 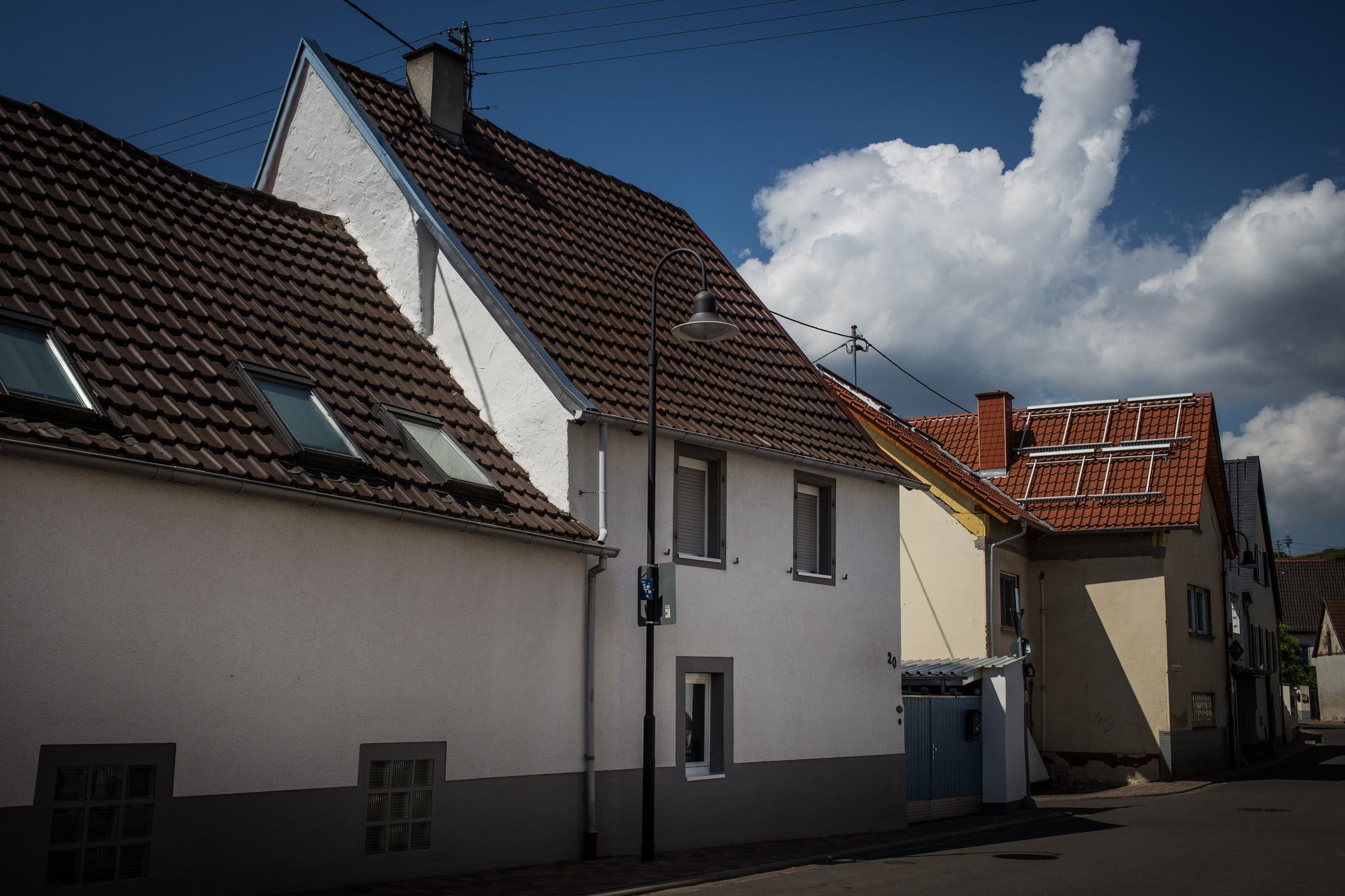 There are no signposts to the ancestral Trump home, a modest property with a sloping roof and blue gate on one of the main village roads.CreditLena Mucha for The New York Times

Sometimes she is so annoyed that she sends them the wrong way, or to the house of a neighbor she does not much like. The other day she wanted to do her weekly shopping, but her driveway was blocked by a tourist bus.

Her neighbors opposite, who bought Mr. Trump's grandfather's house — and, like Ms. Müller-Wohler, did not know the history before the purchase — are so exasperated that they have tried, and failed, to sell.

Like the man himself, Mr. Trump's ancestral presence is disruptive.

After his election, local hotels received boycott threats and some cancellations from longtime customers. Wine orders were called off. Emails arrived from all corners of Germany, challenging the "Trump village" to take a stance, Mayor Jaworek recalled.

Standing behind the counter of the Trump bakery in nearby Freinsheim, Ursula Trump recounted a phone call she received shortly after Mr. Trump was elected president.

On the line was a woman imploring her to "please call him and tell him not to build a wall" at the Mexican border, Ms. Trump said.

When Mr. Trump was inaugurated, she baked spongecakes covered in stars and stripes and edible pictures of him. "It was a joke," she said. But neighbors started boycotting her bakery, and she did not make the cake again.

If Kallstadt's relationship with Mr. Trump is difficult, that appears to go both ways.


Mr. Trump even used to deny his German ancestry altogether, claiming that he had Swedish roots. (There is a Karlstad in Sweden.)

"Fake news," commented Roland Paul, a local historian who was one of the first to research Mr. Trump's German family.

Mr. Trump's grandfather left Kallstadt for the United States at age 16 in 1885, and returned in 1902 a rich man, Mr. Paul said. He married the girl next door, and the couple went back to America.

But soon Ms. Trump became homesick and wanted to go back to Germany. They returned, and her husband wrote a series of letters in 1904 and 1905 requesting the right to regain residency. Because he had not performed his military service, the Prince Regent of Bavaria refused.

"We shall be ordered to leave?" Friedrich wrote after being informed that his visa would expire in July 1905. "That is hard, very hard for a family."

For some here, there is paradox in that history.

"The heartlessness of the Bavarian bureaucracy towards Mr. Trump's grandfather is reminiscent of the heartlessness of the president towards illegal immigrants in America," said Walter Rummel, the director of the state archive in nearby Speyer, where the unsuccessful immigration file of Friedrich Trump is kept.

For the past seven decades, contact with the American Trumps has been sporadic.

The Trump Organization donated $5,000 to help restore the church facade in 2001; Mr. Trump himself signed the check, said the pastor at the church, Oliver Herzog. 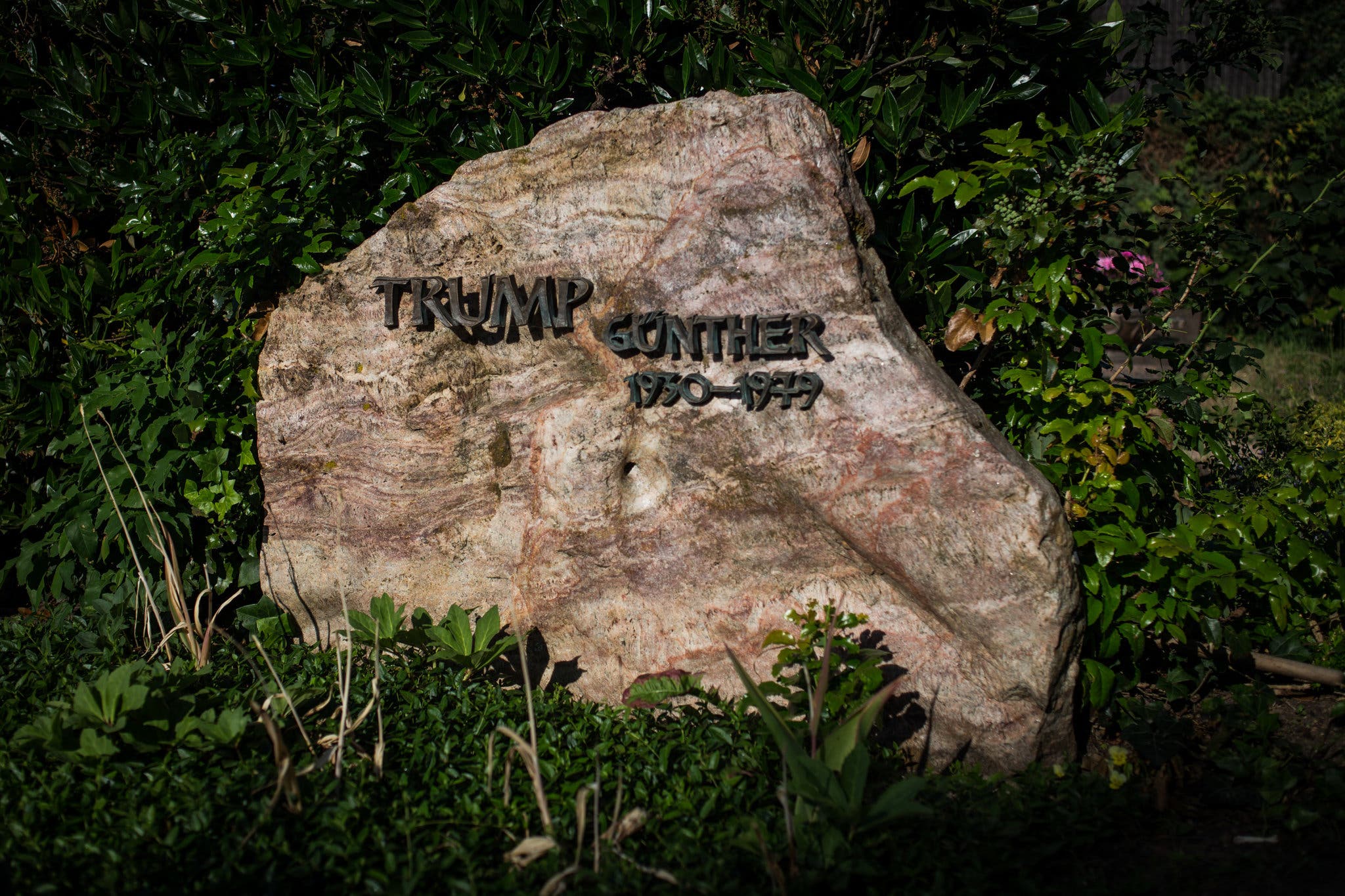 Little aside from the names on a few graves in the village cemetery hints at Kallstadt's most famous grandson.CreditLena Mucha for The New York Times

Mr. Trump's grandmother visited in the 1920s, said Mr. Paul, the local historian. The only other American Trump who appears to have come through Kallstadt is John Walter, a first cousin of the president and family historian.

Another Trump relative is Steffen Geissel, who does quality control for local wines. His great-grandmother was a sister of Mr. Trump's grandfather. His grandmother Louise flew to America to attend the 80th birthday of Mr. Trump's father, Fred, when Mr. Geissel was a boy, he said. She brought him back a signed photograph of Mr. Trump.

"Best wishes to Steffen," it reads. All of his cousins got one, too.

Since Mr. Trump's election, Mr. Geissel said, "everyone has been trying to work out how closely related they are to Trump."

This can sometimes lead to curious exchanges. Bernd Weisenborn, whose great-grandmother Barbara was also a sister of Friedrich Trump, was serving a local customer in his restaurant shortly after Mr. Trump quit the Paris climate accord.

"Look what your relative is up to again," the customer said.

"He is your relative, too!" Mr. Weisenborn shot back.

Now Kallstadt is alive with rumors that the president himself may visit.

In January, the mayor met with the United States general consul, who wanted to see the Trump house and, over pig stomach and grape juice, announced that he would send the ambassador to visit next.

And when Chancellor Angela Merkel visited Mr. Trump at the White House in April, she gave him a map of the Palatinate region where Kallstadt is.

All recent American presidents have visited the Ramstein air base, the headquarters for United States troops in Europe, a mere 45-minute drive away, Mayor Jaworek pointed out.

But if the president comes, he might be the only Trump around.